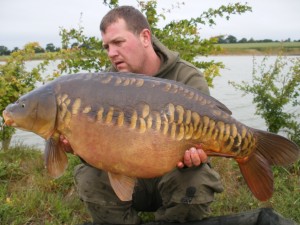 November 2011. The Lavers stock is continuing with the amazing growth rates shown since the syndicate was formed in May 2007. One of the first stockings were a batch of  twenty C4’s from Frontfish UK back in January 2007.

These carp which are a mixture of fully’s, zips, leathers, commons and a variety of other scale patterns have absolutely thrived in the venue. From a stocking weight of 9 to 12 pound they are all now 25lb plus with the biggest reported going 30-10. These outstanding carp are still only eight year fish.

In the autumn in 2008 another 36 carp, all mirrors, were introduced at between 7 and 12 pound. At that time the majority of the lake was choked from top to bottom with thick canadian pondweed. This made fishing very difficult for the majority, not only in presenting a bait but also the carp were holding up in the 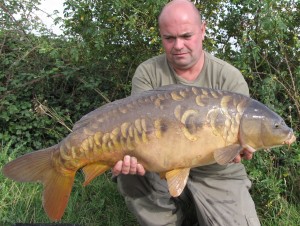 weed instead of feeding. To alleviate this problem the idea was to introduce some hungry, aggressively feeding carp to colour the water up which was hoped would help curtail the weed growth. These again were Frontfish carp that went into one of our stock-ponds as C3’s at 4 to 7 pounds the year previously. By the spring of 2009 the water was definitely colouring up, since then the weed has died back considerably making good presentation a lot easier. The fantastic growing conditions of Lavers has had its effect on these stockies with over half now being twenty plus. As can be seen in this awesome big framed 26-08 scaley on the right the growth is on the length of the fish which is how it should be. At only seven years old this is going to be one to watch for the future !.

Since the first stocking we have kept an accurate log of all the 100 odd fish introduced, with photos of each side and weights stocked at being 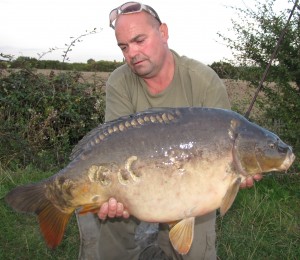 recorded. We began to notice there was the odd fish coming through the ranks that was born and bred in the lake. On checking the records we discovered that these carp have done really well with some of them now going twenty pound plus. Its fair to say that these carp must be the off-spring of the first spawning back in 2007 making them 5 summer carp which is a fantastic growth rate even for farmed fish. Check out the deep bodied 21-04 mirror on the left which we have no record of stocking. It turns out that we have now got five diferent year class of carp that have come through the ranks in all shapes and sizes. Luckily we have a 2 acre stock-pond next to the main lake with permission off the E.A. to transfer some of the carp coming through when they are caught. Obviously this has to be done so we continue to get the great growth rates the venue currently enjoys. Saying that there are some lovely carp coming through which we will be keeping in the lake and monitoring their progress. Most of the members of the syndicate have been using very good quality boilies as their main bait for the past few seasons. This has resulted in some really chunky little ones coming through. If you ever wondered what carp would look like with a diet consisting largely of boilies have a look at this linear below which was caught at 7lb in September 2011(update Nov 2015 now 27lb). Its the same length as the C2’s we put in the stock-ponds which are very big at 2lb plus but looks like its been on steroids. Either way its a big C3 or a absolutely massive C2. Definitely a keeper and one to keep an eye on !. 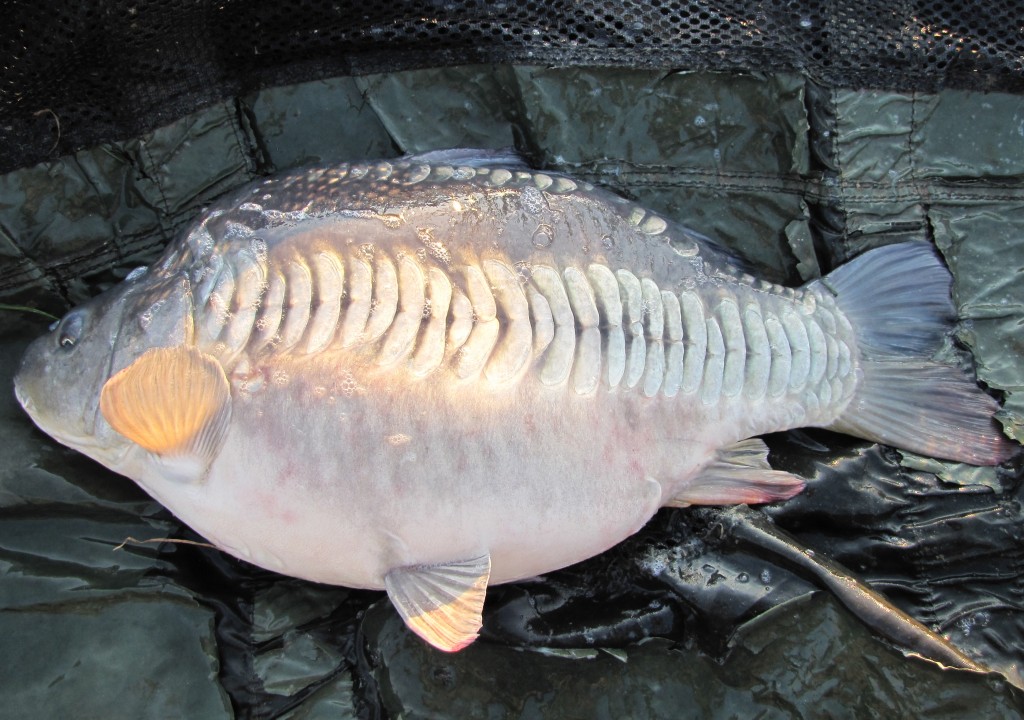 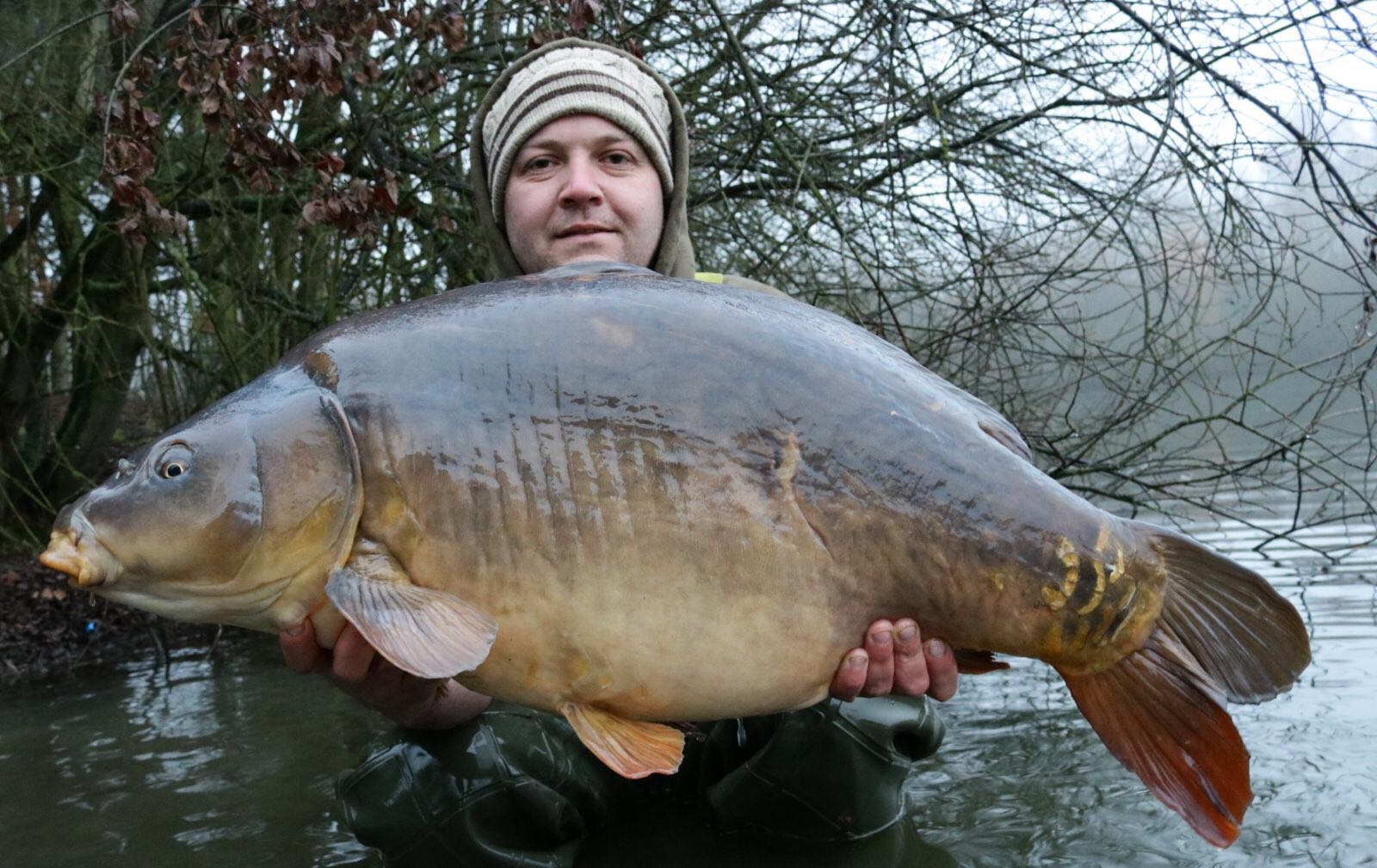 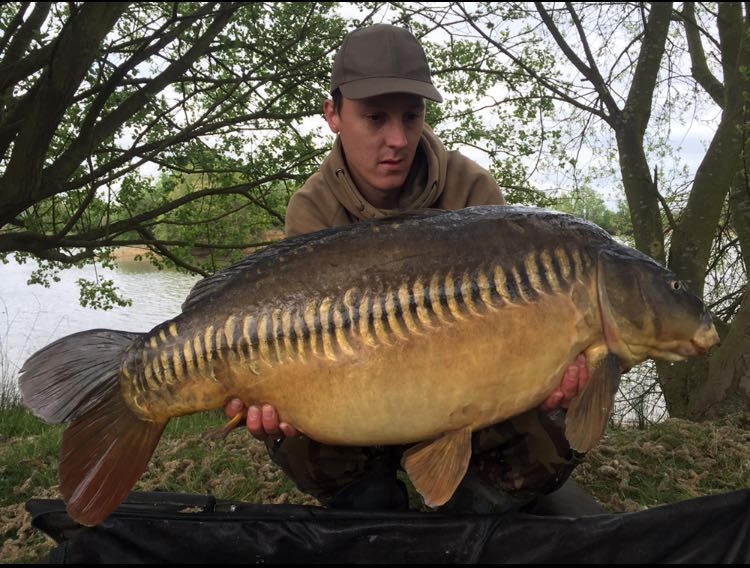